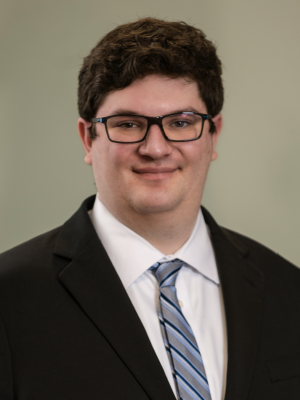 David Kruger grew up in Highland Village, Texas and attended Marcus High School. David is an Eagle Scout from Troop 265 in Flower Mound, Texas. David received his bachelor’s degree in Letters, manga cum laude, in 2016, from the University of Oklahoma. While at the University of Oklahoma, David was a member of the Pride of Oklahoma (the marching band) and awarded membership in Phi Beta Kappa. Membership is only extended to the top 10% of graduating class in degrees focusing on the arts and sciences. David attended Southern Methodist University Dedman School of Law where he obtained his law degree in 2020. While at SMU he participated in the Board of Advocates in advocacy events on and off campus, especially in moot court, which culminated in his selection to the Order of the Barristers, a national honor society whose membership is composed of up to 10 of the best advocates on campus. He served as an extern to a Federal Magistrate Judge in the Northern District of Texas: Dallas Division, and participated SMU’s Corporate Counsel Externship program.

David’s practice focuses on business and real estate disputes and transactions, and civil litigation. David is admitted to practice in all Texas State Courts.